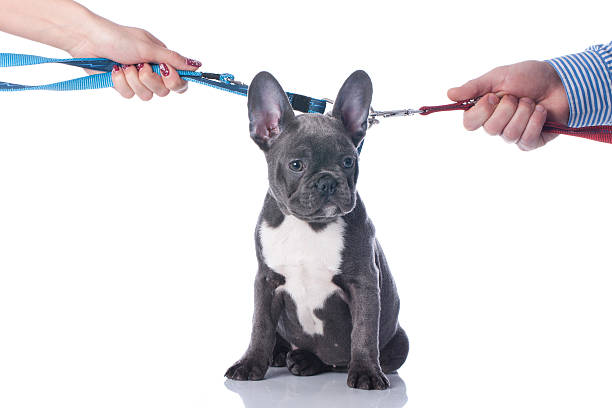 Paul Giarrusso rarely cries. But the 59-year-old from Rhode Island wept after his ex-wife decided that he could no longer see their two dogs, Marox and Winnie. “It tortured me,” he says. “In our whole divorce, that was the only thing that could hurt me.”

For nearly two years, Giarrusso fought for custody of the pets in family court and then in the state supreme court, spending about $15,000 in legal fees. “I went through hell,” Giarrusso says. The fight was worth it, he says, when a judge in April 2019 said Giarrusso could have the dogs on Tuesdays and Wednesdays every week. When Giarrusso finally saw them again, Marox, a 16-year-old miniature Italian greyhound, and Winnie, a 14-year-old dachshund-­chihuahua mix, covered him in slobbery kisses.

“These dogs are like kids,” says Giarrusso, a high school and college sports referee who has no children. “They’re everything to me.”

They’re also everything to his ex Diane Marolla, whose custom-made shower curtain is a grid of photos of the dogs and whose license plate reads Marox 1. “I will compromise everything,” she says, “but I won’t compromise these dogs.”

The custody dispute was unusual enough that it attracted local media coverage, but divorce attorneys say these fights are becoming more common as state courts confront divorce laws that fail to recognize that in ever more homes, not every crucial bond is between humans. In the past three years, three states have changed their divorce statutes to treat pets more as family members than as mere chattel to be divided by couples, like sofas and TVs. Rhode Island; Pennsylvania; and Washington, D.C., have legislation pending that would do the same. 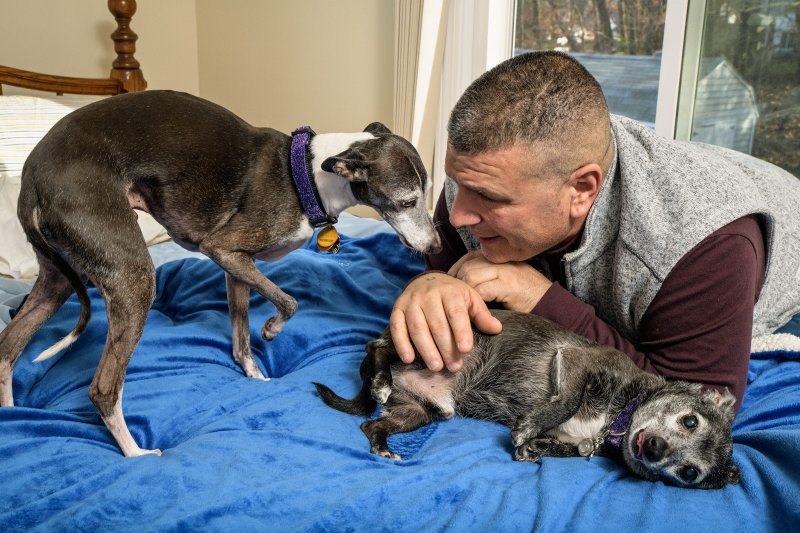 “There’s a perception that animal legislation isn’t as important as other legislation,” says Rhode Island state representative Charlene Lima, a Democrat, the sponsor of her state’s bill and the owner of a 9-year-old Siberian husky. “I think that’s a complete fallacy.” So do divorce lawyers, who say courts are ill prepared to adjudicate pet-custody battles, leading to dragged-out fights. In 2013, when the New York County Supreme Court had to step into a couple’s quarrel over a miniature dachshund named Joey, it acknowledged that changes in the way society regards pets all but guarantee these cases will increase.

“People who love their dogs almost always love them forever,” Matthew Cooper, the dog-owning justice wrote as he considered Joey’s future. “The same cannot always be said for those who marry.”

The couple in Joey’s case eventually reached a custody agreement on their own, but Cooper, in his ponderings, cited several other custody feuds involving dogs, and one cat, that judges had to settle.

Nowadays, 80% of owners view their pets as family members, according to a survey by the American Veterinary Medical Association (AVMA). More dogs and cats are adopted from shelters, friends or relatives, or taken in as strays, than are purchased from stores and breeders. Nearly all cat owners and more than half of dog owners describe their pets as mixed breeds or mutts.

“All of a sudden, with animals that have no street value, people are pouring in thousands of dollars to save them,” Gislason says. “Now it’s not just about what work the animal is going to do. It’s about something deeper.”

Estimates of pet ownership today range from 56.8% to more than 65% of U.S. households. The higher figure comes from the American Pet Products Association trade group and would mark a record high. Millennials are the majority of pet owners and may be caring for pets the way they would care for the children they’re not having—the 2018 birth rate was the lowest in 32 years. Of 1,139 millennial pet owners surveyed in 2018 by TD Ameritrade, nearly 70% said they would take leave from work to care for a new pet if they could. Nearly 80% of women and almost 60% of men surveyed said they considered their pet their “fur baby.” The number of pets with health insurance jumped 18% from 2017 to more than 2 million in 2018. All of this has fueled a need for veterinarians. The U.S. Bureau of Labor Statistics predicts jobs for vets and vet technicians will grow by nearly 20% by 2028.

One survey of Hurricane Katrina survivors found that 44% of those who refused to evacuate in advance of the 2005 storm that swamped New Orleans cited pets as the reason. This reluctance to leave a deadly situation spurred passage in 2006 of a federal law requiring state and local officials to include pets and service animals in disaster planning, from evacuation scenarios to shelters. Still, people don’t want to be separated from their animals in times of crisis. As Hurricane Harvey floodwaters poured into his family’s Houston home in 2017, Isiah Courtney trudged through waist-deep water with his 85-lb. pit bull in his arms. “I couldn’t leave him behind,” Courtney, 30, says of his dog Bruce, who’s now 4. “I couldn’t let anything happen to him.”

When Giarrusso and Marolla filed for divorce in 2016 after 23 years of marriage, both knew that a judge was likely to split the dogs up. That’s because Marox technically belonged to Giarrusso and Winnie was Marolla’s, and family judges generally assign pets to the owner whose name is on adoption papers or other official documents. But the dogs had bonded, so the couple agreed that Marolla would keep them and her ex would have visitation rights. They even had a plan in case one of them moved out of state: Giarrusso would get the dogs for three months each summer, for a week at Christmas, in February and in April. 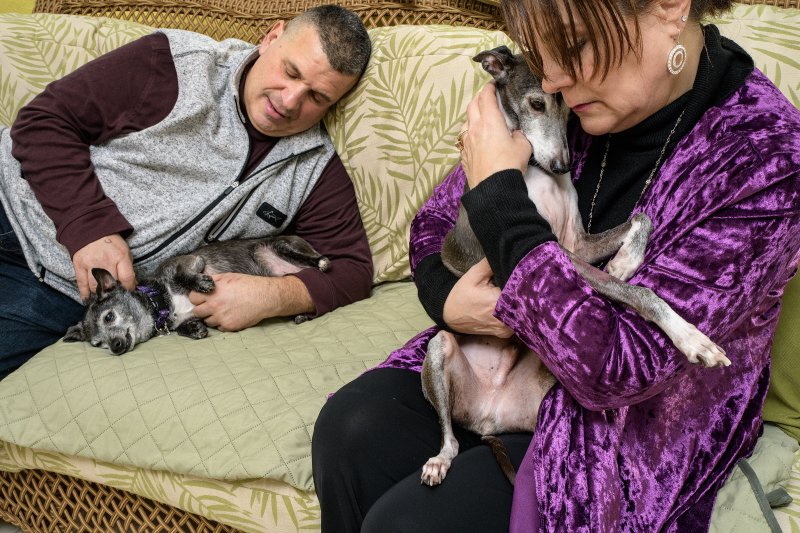 The system worked until Marolla, in spring 2017, canceled the visitation arrangement. In court documents, she accused Giarrusso of not properly caring for Marox and Winnie—an allegation he denied. During a court hearing, Marolla said the “final straw” for her came when she went to pick up the dogs from Giarrusso and discovered that Marox was missing. During a nearly two-hour search through the neighborhood, Marolla testified, she was so distraught that she was “puking on the side of the road.”

“It was like a someone-died feeling,” she tells TIME. When they found Marox—safe in the house but shut inside a closet—Marolla canceled Giarrusso’s visitation rights, prompting the court dispute.

“I knew it would be an uphill battle,” Marolla says of her quest for full custody. But the 54-year-old social worker says she only wanted to protect her pets. “I just want these dogs to be healthy and happy until the day they leave this planet,” she says.

In Kentucky, a woman’s attachment to her cats, Beanie and Kacey, landed her behind bars. Lynn Goldstein was jailed for 30 days in 2001 after she repeatedly refused a judge’s order to give her ex-husband custody of the cats. She was caught hiding the felines at a friend’s office. “I would walk through hell and fire for those animals,” Goldstein, who eventually was forced to let her ex-husband take the cats, said at the time.

In 2017, Alaska became the first state to require judges in divorce cases to consider the pet’s well-being, similar to a standard applied in child-custody cases. The provisions, which the Animal Legal Defense Fund (ALDF) called “groundbreaking and unique,” allow joint ownership of a pet and the inclusion of pets in domestic-violence protection orders. The bill was the brainchild of the late state representative Max Gruenberg, who as a family lawyer had once handled a custody case involving a sled-dog team. It inspired Illinois to follow suit in 2018 and California in January 2019.

Animal advocates point to science, among other things, in arguing that pets are more than mere property. We now understand that animals have awareness and, depending on the species, emotions and intuitiveness. Dogs understand us and, in their own way, love us—though researchers warn that there is often bias in the way we interpret their behavior; the dog who appears to be offering comfort with a nuzzle may instead be seeking comfort. Other animal behavior is less ambiguous. Elephants appear unmistakably to mourn their dead—even caressing their bones. Crows, jays and other corvids fashion tools from paper clips to fetch food. Octopuses, with their central nervous systems and brains distributed across eight limbs, have managed cunning escapes from their tanks.

“Our views toward animals, the inherent value that they have and all of the ways they are distinct from other forms of property—I think people are becoming more aware of that,” says Cristina Stella, a senior staff attorney at the ALDF.

But passage of new animal-rights laws doesn’t come easily, and opposition has come from unexpected sources. In Rhode Island, opponents of Lima’s proposed legislation include the AVMA, which fears legal repercussions for veterinary workers if pets are given elevated status in divorce court. “While the AVMA and its members clearly love pets and recognize their importance to their owners, we also believe that their current legal classification as property is appropriate,” AVMA spokesperson Michael San Filippo said in a statement.

It wasn’t until 2014 that all 50 states had felony laws against animal cruelty. On Nov. 25, 2019, President Donald Trump signed a bipartisan bill that makes animal cruelty a federal crime. Kitty Block, president and CEO of the Humane Society of the United States, said the passage “marks a new era in the codification of kindness to animals within federal law.” At least 34 states let judges include pets in domestic-violence protection orders. 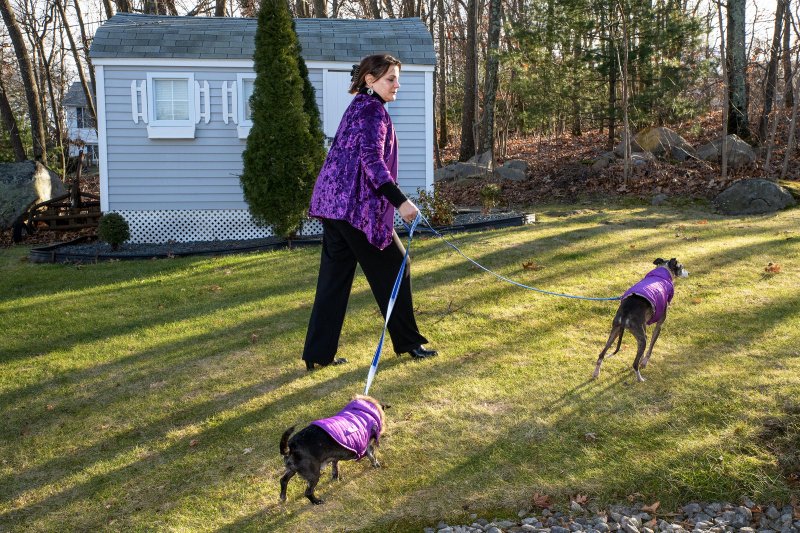 Marolla has custody of Winnie and Marox five days a week

Animal lovers say a change in divorce law can’t be far behind.

When Giarrusso and Marolla married in 1993, neither expected their union to crumble. They also had no idea the fight for their pets would be the most painful part of their divorce. “Boy, was I in for a rude awakening,” Giarrusso says. By the time the legal dispute was over, Marolla had paid $38,000 in legal fees. “I spent my whole savings,” she says, her voice trembling. “It’s gone.” But she finds comfort in her dogs five days a week, and Marolla and Giarrusso agree on at least one thing: courts and naysayers should acknowledge the pain couples endure when neither can bear to part with their pets.

“If you had to go through this,” Giarrusso says, “you’d probably have a change of heart.”